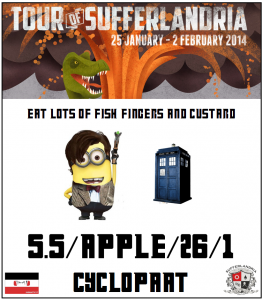 Last modified: February 1, 2014 – my second Tour of Sufferlandria is done!

There is a reason I have avoided Violator and today confirmed I was right in doing so.

Many people seem to like it, probably (mainly) because of the 64 recovery intervals.

However, as I suspected, this doesn’t apply to me – maybe if I’m well rested I can do a better job of following the line, but not today.

I just kept on pushing during the 5 second intervals, because there simply is no way I can accelerate and slow down between 30+ and 60+ kph repeatedly during that time frame.

The longer intervals were better, but suffice it to say I’m feeling violated…