This is one of the more famous alpine high roads (in Austria) and with 11 kilometers over 10%, it’s ranked 5th in Europe on that list.

As a reference: the Stelvio only has 6.2 kilometers over 10% on the Prato side.

The profiles I found were are a bit confusing, as there are two extra or separate ‘forks’ you can take: the Edelweissspitze and the Kaiser Franz-Josef-höhe.

The profile of the climb from Fusch to the Edelweissspitze, is the second profile card on the info page. The start of that, is just before the last 150 meters to the Fusher Törl, at the parking to the left.

The weather forecast was not too good, the temperatures higher up would be close to freezing and there was fresh snow.

But since I looked forward to this for nine months, I was not going to be scared easily.

Luckily, a reconnaissance was done by car the day before – the weather was much better and a lot of nice pictures for the gallery where taken during that trip to the Fuscher Törl.

Monday morning, June 29, around 10:30, I got on my bike and the first 8 kilometers from Bruck to Fusch went very well, despite the hefty 50 meter altimeter gain 🙂

However, upon leaving Fusch and going towards the toll station, the smirk on my face disappeared rapidly, as the first 1,5 km of that has a 10% average and you’ll warm up pretty quickly.

From the Ferleiten toll station, the climb to the Fuscher Törl is timed if you buy a €2 ticket, otherwise the cyclist is not paying toll.

After pulling a ticket from the machine, I got to the serious part of the climb.

From thereon, you do not get any ‘rest’, although the outside of the hairpins can be used to your advantage – they are slightly flatter than on the Stelvio, but the average percentage is (substantially) higher.

The elevation difference towards the Fuscher Törl is around 1,250 meters in some 13 kilometers, which means that you will meet stretches of 12% and in this case, the low – steadily dropping – temperature, was a blessing…

However, despite the sometimes foggy conditions, there was a lot of beautiful scenery to take in and I also admired the architectural masterpieces of the road itself.

It’s kinda funny how you enjoy or appreciate these things even more when you’re riding your bike – that is what it’s all about, isn’t it?

In just under 1:20 I was at the ticket machine at the Törl and I was disappointed that it had taken me so long – after all, an average of 10 kph, is not all that impressive.

However, when I got my certificate – back down at the toll station – I looked at the dozens of other tickets lying around and noticed that only a few times where actually better than mine 🙂

While at the Törl, it started to snow and we sheltered in the souvenir shop, where I also ‘scored’ a couple of memorabilia.

After it cleared up a bit, I got on the bike again and climbed up the Edelweissspitze – this piece of (brick) road has been constructed with money that was left over from the budget, which is unthinkable nowadays.

The stretch is only some 1.8 kilometers, but with 180 altimeters, it’s not easy.

At the summit (2,571) I was met with no view, as the fog was blocking it – apparently, when you do get to enjoy the view from there, it is spectacular.

We did have something to eat after which I went down the Fusher Lacke (2,261) by car, as it was foggy and slippery. 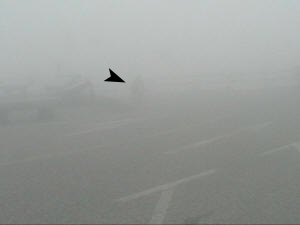 The climb from there to the Mitter- and Hochtor – 4 kilometer up to 2,505 meters – went well, but by the time I got at the Hochtor, the visibility was zero and I did not dare to go down towards Heiligenblut on the bike.

The drop to the Guttal, the split to the Franz-Josef-höhe, is 650 meters in less than 6.5 kilometers and the first 2 or so where freaking me out even in the relative safety of the car.

By the time we got down and I got ready for the climb, it had started to drizzle, so I put on a raincoat.

However, I had just started this ascend, when the drizzle turned to rain and just some kilometers in, it was raining so hard, that I was close to getting back in the car and call it a day.

I was tired, wet and cold, but the Bike Rebel motto kept me going and the last 2 kilometers it even stopped raining.

All in all, this stretch is relatively ‘easy’ with ‘only’ some 450 altimeters over the distance of 8.5 kilometers, but I was sure glad it was over and I had made it.

Unfortunately, everything was (already) closed by the time I arrived at the panorama restaurant, so I didn’t hang around very long.

We went on (down) to Heiligenblut by car.

Once in the much more comfortable city, we walked around a bit and had coffee and something to eat.

When I regained my strength a bit, I was considering getting back on the bike to go back up to the Hochtor again, but Paula prevented me from doing any more stupid things. Today anyway – and actually, I was glad that she did…

Video footage here (PG-13, not suited for minors, but the language is Dutch) and yes, together with last year’s Stelvio, this clearly shows it was time to lose weight 😎